Okay! Now it’s time to try your hand at some more advanced camera shots. How many of these can your students spot from ten minutes of watching one of the movies on Scholastic’s list?

Cowboy Shot – This is a show framed to capture a subject from the actor’s head to the mid-thigh. It gets its name from Westerns, which is when it was first commonly used.

Crowd Shot – This is a shot of a large group or crowd of people in a film.

Deep Focus Shot – This is a shot where all the objects within a frame are in focus (compare with a Soft Focus Shot).

Discovery Shot – This is a shot where the moving or panning camera unexpectedly comes upon or ‘discovers’ an object or person previously undisclosed to the viewer.

Insert Shot – This is a shot that occurs in the middle of a larger scene or shot, usually a close-up of some detail or object, that draws audience attention, provides specific information, or simply breaks up the film sequence.

This insert shot from Zodiac allows the audience to see exactly what the character sees.

Intercut Shots – This usually refers to a series of shots, consisting of two simultaneous events, that are alternated together to create suspense. Intercutting can also consist of shots of two people involved in a telephone conversation. 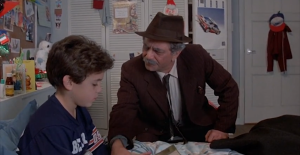 In The Princes Bride, the adventures of Wesley and Princess Buttercup are occasionally interrupted to show the audience that it is a grandfather telling his grandson the tale.

Montage Shot – This is a filming technique consisting of a series of short shots or images that are rapidly put together into a coherent sequence to create a composite picture, to suggest meaning or a larger idea, or the passage of time.

Point of View (Objective Shot) – This shows a view from an object’s perspective (ex, a hockey puck spinning through the air right before it hits someone). Basically, the camera takes the place of the object.

Point of View (Subjective) Shot – This shows a view from a subject’s perspective (like looking through his eyes). 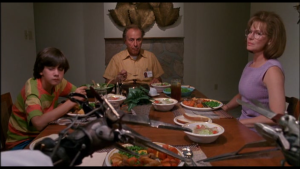 In Edward Scissorhands, the title character looks at his new family from across the dinner table.

Reaction Shot –  This is a quick shot that captures a character’s response or reaction to what another character has said or on-screen action. 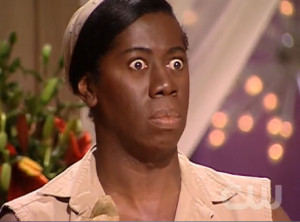 Soft Focus Shot – This is a shot where only some objects within a frame are in focus, as a means to drawing attention to them (such as a character’s expression).

The rest of this scene in Jumanji is slightly blurred, so the audience’s attention is drawn to Robin Williams’ expression.