I recently spoke to four different groups of kids who attended the programs at the Cobb County Public Library System; specifically, the Vinings, Mountain View, South Cobb, and Switzer locations. It was great to share my love of reading and writing with kids who were so enthusiastic, and I also got to tell them about my middle grade book, Monsterville: A Lissa Black Production: 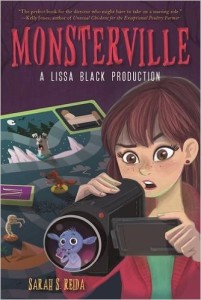 The perfect Halloween read, Monsterville is Jumanji meets Goonies, a fast-paced adventure where board games come alive and winning your life depends on applying monster movie rules of survival. 13-year-old film-obsessed Lissa discovers a shape-shifting monster in her woods and decides to film the greatest horror movie of all time…until her little sister is kidnapped to the monster homeland of Down Below and she needs her star’s help to rescue her.

To get kids excited about Halloween, at the Vinings and Switzer locations we held monster drawing contests where the kids had the option of drawing monsters from Monsterville, or “other.”

Since I always loved the Rebus stories in Highlights magazine (where an image supplements a story by appearing above a noun), I created one of my own using the entries (with permission, of course!). Here is my own Rebus story, which is an excerpt from my book. This is the part where Lissa, my main character, first finds the game Monsterville in her basement:

But what was that at the bottom of the pile? It was a light-purple box, square and with black letters stenciled on the top. It was so dirty and dusty I couldn’t make out the words.

With my right hand, I rubbed away the filth. Monsterville. Then, beneath it: A Monster Around Every Corner. The lower left-hand corner contained black initials: L.B. Probably for “Lucy Black.”

I flipped the box, looking for a Parker Brothers or Milton Bradley logo, but there wasn’t one.

I heard water dripping in the corner again. I looked up and glanced around. Long shadows stretched across the floor, and I couldn’t see the far wall in the darkness.

Tucking Monsterville under my arm, I dashed across the concrete floor and pounded up the stairs.

“Find anything good?” Dad smiled innocently. He’d switched to a re-run of The Office.

“Just this.” I shook the box before dropping it onto the coffee table, sending a cloud of dust into the air.

Haylie scooted over with her Barbies. “I want to play.” She pried off the lid. “Neat!” She flattened the game board on the table and pulled out the little figurines.

Mom shut her laptop and put it on the coffee table. She rummaged for the game’s instructions and handed them to Dad. “You do the honors.”

“Put each monster in the proper habitat,” he read from a yellowed piece of paper. For example, the spiders in the hills,

the troll near the bridge, 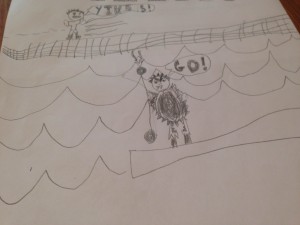 the sandman in the desert, 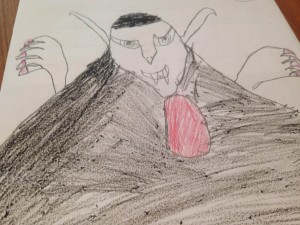 the mummy by the pyramids, 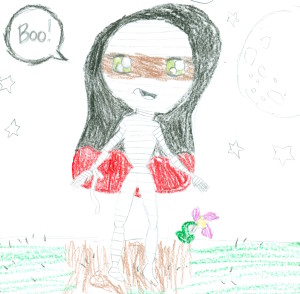 the werewolf in the woods, 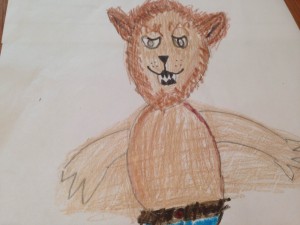 the zombies in the town, 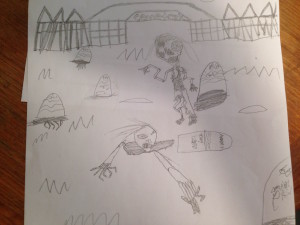 the Lochness monster in the ocean, 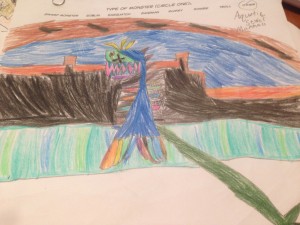 the blob guarding the cliffs.” 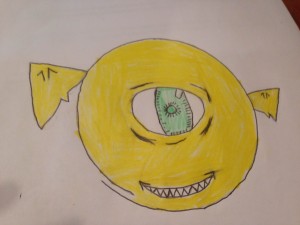 Mom pursed her lips as Haylie placed each figurine in the right spot. “I don’t know about this. . . are you sure this game’s appropriate for Haylie?”

I leaned closer to inspect it. We had nothing to worry about. The monster figurines were too cartoonish to be scary. The blob looked like a ball of bright orange Jell-O with little nubs for arms. How was it supposed to grab you? “Looks fine to me,” I said.

“Okay. But if Haylie has nightmares tonight, we’re never playing this game again.”

“I’m never scared,” Haylie proclaimed, twirling one long blonde strand around her finger and reaching for the gingerbread man-shaped player pieces. “Can I be the blue boy?”

“Um, sure.” I was surprised that Haylie wanted to use the boy piece, since she loves anything glittery or pink or unicorny.

“Up to four players can play,” Dad continued from the instructions. “Take your place at the beginning of the board, under the bed. Each player chooses a separate trail and battles his own monsters to rescue the kidnapped princess.”

Also, following the discovery of Monsterville, Lissa encounters monsters living in her very own woods!

As it turns out, both monsters are really the same creature: a shape-shifting goblin named Blue who has escaped from the monster homeland of Down Below. But Lissa doesn’t know this at the time.

Blue as a swamp monster hungry for “brains:” 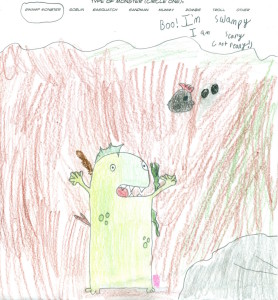 Blue as a Sasquatch that “moos!” 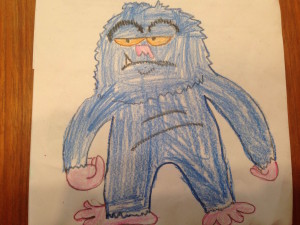 Thank you to all of our talented participants! And if anyone wants to check out Monsterville, buy it just in time for Halloween on Amazon or at Barnes and Noble.