My writing career began when a wonderful teacher, Mrs. Story of Millstadt Consolidated School, encouraged my aspirations by choosing me to write a story to represent the fourth grade in a school-wide writing showcase. I still remember poring over that story, painstakingly creating my own cover, and reading it aloud for a camera mounted on a tripod (as the school compiled a tape of the selected students reading their works).

For me, being acknowledged as having writing talent was a defining moment of childhood. It also reinforces to me how important it is to encourage kids who want to write. What if there had been no Mrs. Story?

My debut novel, Monsterville: A Lissa Black Production, was published on September 20, and I was lucky enough to hold events at Cobb County (Georgia) libraries. One of these included a scary story writing contest at the Mountain View Branch. This blog post is a nod to the wonderful kids at Blackwell Elementary School who participated in the contest, as I was blown away by their creativity and effort.

While I am showcasing the three winners here, every story showed promise. Also, not a single story was similar to another! There was one about witches in Marietta; one about a magic, evil ring; one about a dream that might be real; one where an enchanted drum tempts two girls to give up more than they should; one about a sleepover, with a twist; one where a mythical creature decides to show itself; one about a prank-loving kid who gets a taste of his own medicine; one featuring a kid with a vampire for a new neighbor; and one with a haunted mansion and a cousin who meets an unfortunate end.

When choosing the three winners, I looked for effort and originality. I’m so pleased to share these three stories with the world! Drumroll, please. . .

In THIRD place, is Boston. I spoke with Boston during the Mountain View event. She was not only a very sweet, polite kid, but she was intelligent and interested in history. Her story – rather than including the “traditional” monsters like zombies and witches – used tragic or scary historical events (for instance, the Hindenburg, Titanic, and Trail of Tears). The result was a creative story called History Attack. You can read it here.

In SECOND place, is Ava. Her story stood out to me because, like Boston’s, it didn’t include traditional monsters. Rather, it was about a kid, Tommy, who doesn’t listen to his mother on Halloween and therefore puts himself in danger. I was really impressed that a kid would know how to write a “cautionary tale” so effectively (kids, a cautionary tale is a story with a point to it – here, the point was “listen to your mother!”). You can read Ava’s story here.

In FIRST place, is Finalee. Now, while I understand that this was a scary story contest, I have to say that I laughed multiple times while reading this one. It’s about two sisters who discover an abandoned dog, unchain it, and are then terrorized as it wreaks havoc on the neighborhood. Complete with illustrations and an “about the author,” it was clear how much work had gone into Finalee’s story. She was also one of the most enthusiastic kids at the event, asking a lot of questions about my road to publication and ecstatic to come in first. You can read her story here.

Parents and teachers, I can’t emphasize enough how important it is to encourage our young writers. Parents, read to your children! And save and share their work. Mine did this for me, and it made a difference. As for teachers, keep an eye out for kids who love to write and read! Encourage them, and give them credit for effort and innovation. They will remember it forever, and it may affect their direction in life. Mrs. Story did this for me, and you have the power to do it for your students! (See below to see where it all began – for me, and for future author Finalee!).

*My book, Monsterville: A Lissa Black Production, is JUMANJI meets GOONIES, a fast-paced adventure where board games come alive and winning your life depends on applying monster movie rules of survival. 13-year-old film-obsessed Lissa discovers a shape-shifting monster in her woods and decides to film the greatest horror movie of all time…until her little sister is kidnapped to the monster homeland of Down Below and she needs her star’s help to rescue her. You can find it on Amazon and Barnes and Noble.

Remember the name of this girl! 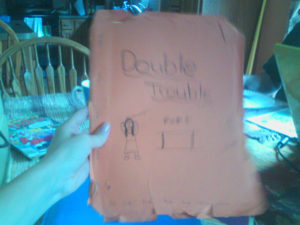 I was plagiarizing Superfudge, but you gotta start somewhere!